Higher Rates: The Tempest in the Teapot

Anybody who was surprised that the Federal Reserve Board decided to raise its benchmark interest rate this week probably wasn’t paying attention. The U.S. economy is humming along, the stock market is booming and the unemployment rate has fallen faster than anybody expected. The incoming administration has promised lower taxes and a stimulative $550 billion infrastructure investment. The question on the minds of most observers is: what were they waiting for?

The rate rise is extremely conservative: up 0.25%, to a range from 0.50% to 0.75%—which, as you can see from the accompanying chart, is just a blip compared to where the Fed had its rates ten years ago. 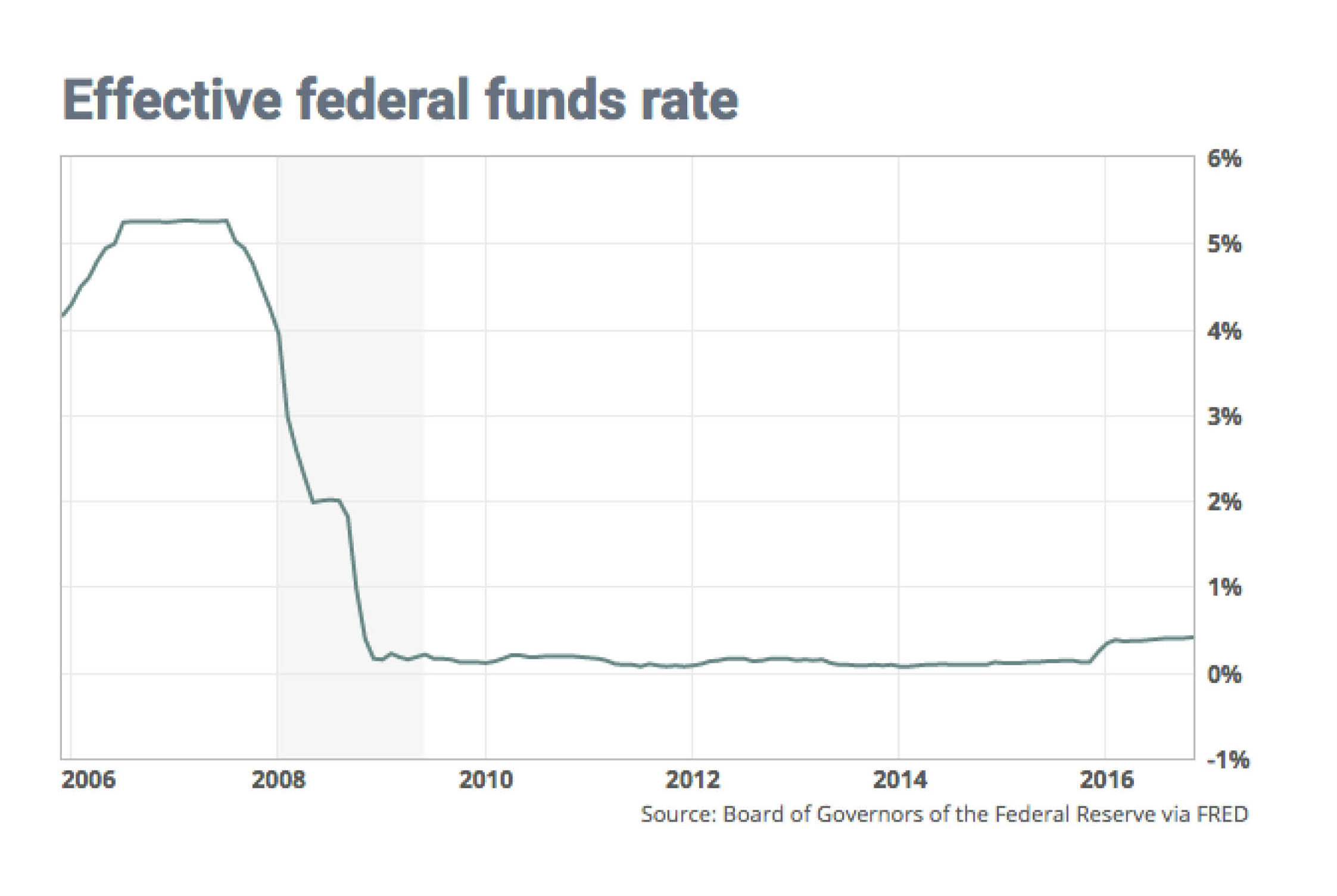 The bigger news is the announced intention to raise rates three times next year, and move rates to a “normal” 3% by the end of 2019—which is faster than some anticipated, although still somewhat conservative.  Whether any of that will happen is unknown; after all, in December 2015, the Fed was telegraphing two and possibly three rate adjustments in 2016, before backing off until now.

The rise in rates is good news for those who believe that the Fed has intruded on normal market forces, suppressed interest rates much longer than could be considered prudent and even better news for people who are bullish about the U.S. economy.  The Fed may have been the last remaining skeptic that the U.S. was out of the danger zone of falling back into recession; indeed, its announcement acknowledged the sustainable growth in economic activity and low unemployment as positive signs for the future.  However, bond investors might be less pleased, as higher bond rates mean that existing bonds lose value.  The recent rise in bond rates at least hints that the long bull market in fixed-rate securities—that is, declining yields on bonds—may finally be over.

For stocks, the impact is more nuanced.  Bonds and other interest-bearing securities compete with stocks in the sense that they offer stable—if historically lower—returns on your investment.  As interest rates rise, the see-saw between whether you prefer stability or future growth tips a bit, and some stock investors move some of their investments into bonds, reducing demand for stocks and potentially lowering future returns.  None of that, alas, can be predicted in advance, and the fact that the Fed has finally admitted that the economy is capable of surviving higher rates should be good news for people who are investing in the companies that make up the economy.

The bottom line here is that, for all the headlines you might read, there is no reason to change your investment plan as a result of a 0.25% change in a rate that the Fed charges banks when they borrow funds overnight.  There is always too much uncertainty about the future to make accurate predictions, and today, with the incoming administration, the tax proposals, the fiscal stimulation, and the real and proposed shifts in interest rates, the uncertainty level may be higher than usual.