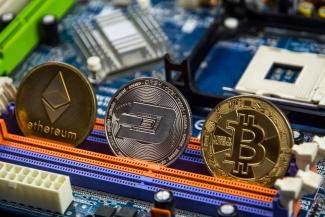 A Digital Currency By Another Name

Coffee lovers: when was your last visit to Starbucks? How many stars (loyalty points) are you away from that free drink? When exchanging stars for a drink, have you ever considered those gold stars as a form of currency?

Starbucks stars are centralized, issued by the company, transacted only within Starbucks’ platform, and designed to support its business—it’s not possible to use them as a substitute for paper money, as they are not a form of legal tender; but in their own way, these loyalty points are a form of digital currency.

Digital currencies date back to 1989 but gained little traction until the global financial crisis in 2008. The impact of the interdependency between financial organizations and centers of economic activity was felt around the globe, driving interest in developing a decentralized currency and decentralized finance (DeFi). In simple terms, decentralized finance means that that there is no overarching centralized exchange or financial intermediate for the currency. Instead, it relies on technology and public blockchain networks. These networks can provide a range of financial (and potentially non-financial) products which allow two parties to interact directly, rather than have an intermediary facilitate the transaction.

The Beginning: Bitcoin, Blockchain, and Cryptocurrencies

In 2008, a ground-breaking paper written by Satoshi Nakamoto introduced a new digital currency, Bitcoin (BTC). Bitcoin runs on a peer-to-peer network (referred to as P2P), with a blockchain forming the underpinning of the transactions.

A blockchain is essentially a layered framework of building blocks where each block is a collection of specific transactions. As transactions are validated on a network of computer systems, they are collated into a block that is chained together in chronological order, creating a permanent record. In terms of technology, Bitcoin is open sourced, meaning the underlying code is free and available for others to use. Programmers around the world have cloned the source code to create alternative systems that added new features and capabilities, leading to over 9,000 variations of the currency—collectively known as alternative cryptocurrencies (Altcoin). Given this spread, a classification system was developed with two main categories:

Bitcoin is the most established digital currency—at one point, it represented over 80% of the market cap. It has lost its share with new entrants but was still above 40% as of April 2021.

Are Cryptocurrencies a Currency or New Asset Class?

Given the infancy of cryptocurrency and its developing behaviors, only time will tell whether it’s a new currency or asset class. One thing is certain, it’s gaining traction and will likely be debated over the coming months and years as we learn more about its characteristics.

Currencies tend to have some key characteristics: a unit of account, a means of payment, and a stable store of value. As of yet, cryptos don’t have these qualities, as few products and services are priced in Bitcoin. While it could be considered a means of payment, it’s not necessarily a scaled process: Bitcoin can process 3-7 transactions per second, while the Visa network can process 65,000 per second. Given the volatility of prices, Bitcoin is not a store of value, as any significant price changes can wipe out profit margins and significantly alter the fair price of goods.

While the jury is out on cryptocurrencies, there seems to be more conviction behind the future of blockchain. Think about the impact Venmo has had on the personal payment process—it has streamlined the exchange of dollars between users, with no or low fees for transfers, checks, or taking money out of an ATM. Cryptocurrencies’ potential ability to enhance payment processing for organizations while lowering transaction costs may provide substantial upside to the financial ecosystem. Even the Federal Reserve and other central banks are currently investigating digital currencies.

How Are Cryptocurrencies Valued?

How to appropriately value cryptocurrencies is a complex, fiercely debated topic in the investment industry and academia. Professor Damodaran, an expert in asset valuation, provides a framework to value assets:

Cryptocurrencies have elements of currency (a medium of exchange), commodities (supply and demand), and collectibles (scarcity), so they likely fall somewhere in between these areas, which makes it difficult to determine the value or price. Some factors that affect how to price cryptocurrencies include the number of units created, the quality of the cryptology and the technology that is used to create new units.

One other key factor that impacts prices is that cryptocurrency markets are designed to be open 24/7, so any movement up or down can be exacerbated. As with any technological systems, cryptocurrency markets and related exchanges are subject to systems delays and outages, etc. In contrast, in the event of a market fall in a traditional financial market structure, investors get to take a pause when the financial markets are closed, and policy makers can consider their options to support the market in the event of a market fall. In the cryptocurrency markets, however, there is no pause button and, in theory, no governing body to bail them out or slow the market freefall.

Layer in the impact of social media as a factor driving short-term price swings on cryptocurrencies, and it can be a turbulent ride. A tweet from the likes of Elon Musk has been known to move prices up or down 20% in a day. Without knowing one’s view of value, the ride may be hard to stomach, but one thing we can be sure of is that “value is in the eye of the beholder.”

What Are the Risks Involved?

While the total value in decentralized finance contracts was more than $41 billion as of March 2021, this number is notional, given the limited liquidity and volume in certain areas of DeFi. Limited liquidity and volume create investment risks for cryptocurrencies when compared to a highly tradeable and liquid asset class, such as publicly-traded, blue-chip equities.

There are other unique risks associated with cryptocurrencies that are not prevalent in traditional liquid asset classes. The infrastructure of public computer networks is prone to being hacked and a potential source for cybercrime. While there may be established protocols to protect networks, there is still the possibility that hackers can drain funds, and investors are left with losses or unable to trade. Technology is not infallible and can crash at inopportune times—which is what happened in 2020 when the Yam Finance platform crashed days after launch due to a code error, locking up close to $600 million on the platform.

Another key concern is that transactions on a blockchain are difficult or impossible to change. Given the linking of blocks in chronological order, if a trade is entered incorrectly, it cannot be easily corrected and is generally considered to be irreversible.

While a driver of the growth of DeFi was the desire to move away from centralized control, it also creates a risk. There is no organization to backstop the market if it crashes.

There is also no established, centralized legal oversight, so who is responsible to resolve crimes that cross borders with different protocols? These issues leave cryptocurrencies open to potential future regulation and controls and pose a risk to the development of robust markets associated with the general public’s acceptance and participation.

Another risk, unrelated to the financial ecosystem, is the cost and risk cryptocurrencies pose to the environmental ecosystem.

The computing power needed to process cryptocurrencies leads to a significant use of energy. When that energy is not driven by renewable sources, it leads to a substantially larger carbon footprint. Digiconomist estimated that the annual energy consumption of Bitcoin alone was similar to that of the Netherlands or, put another way, approximately 3% of the energy consumption in the US. Its carbon footprint was estimated to be similar to Singapore or Libya, driven mainly by the fact that most Bitcoin ‘mining’ facilities have been found in coal-powered regions, like China.

Here are some key things to remember:|