You read a lot about job creation and governmental policies, especially in this era of lingering, lagging economic growth, especially from political figures who are hoping to get elected based on their policy prescriptions.  Republican candidates like to talk about the growth of jobs during Ronald Reagan’s presidency, while Democrats tout the presidential terms of Bill Clinton.

But has anybody ever calculated the actual growth in jobs during the various presidential administrations, and compared them?

Recently, the website Calculated Risk took a deep dive into a pair of interesting job growth statistics for presidential terms going back to Jimmy Carter’s one-term presidency.  The numbers are probably not what you would expect.

The website published these results for each presidential term: 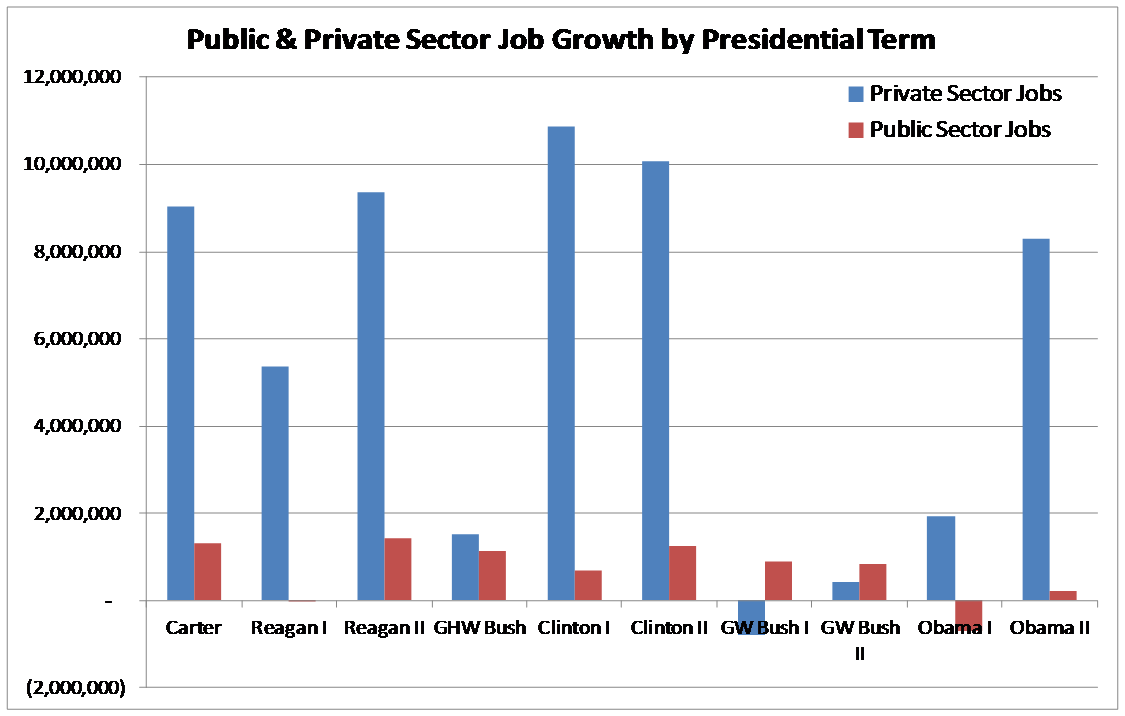 The job growth numbers, to some extent, reflect the circumstances of the times.  George W. Bush had the disadvantage of taking office right as the stock market bubble burst, and he left office during the bursting of the housing bubble.  President Obama took office during the financial crisis and Great Recession.  Meanwhile, Bill Clinton managed to preside over two terms without a recession.

Equally interesting is the growth of public sector jobs added during each president’s term—a somewhat crude measure of their fiscal conservatism.  You might not be surprised to know that the Carter and second Clinton administrations—both Democratic—added the second and third-most public sector jobs to our nation’s payroll.  But the first place winner in this category, and some of the other numbers, might surprise you.

President Reagan cut public sector jobs in his first term, but went on an unprecedented hiring spree in his second one.  George W. Bush and Bill Clinton added roughly the same number of jobs to the public payroll, and both added fewer, per year, than George H.W. Bush during his one four-year term.  Meanwhile, our current president is the only one to post a net decline in public sector jobs.

What are we to make of all this?  Possibly nothing, since our current crop of politicians will cherry pick numbers or, in some cases, simply make them up in their appeal to voters.  But it also suggests that presidential candidates who run on a platform of expanding government might end up contracting it, and those who want to reduce government might end up expanding it.  Those whose espoused policies you might expect to expand jobs might find themselves fighting to contain job losses in the private sector.  Don’t be too surprised by a disconnect between policy prescriptions and results after our next election.