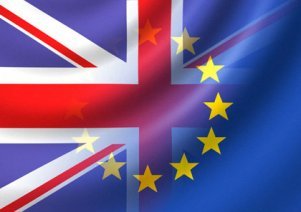 The big question in Europe this year is how the British people will vote on June 23.  Will they vote to leave the European Union (what’s being called the “Brexit”) or decide to continue to be part of the 28−nation economic alliance?

What’s at stake?  It’s hard to know, exactly.  Great Britain already maintains its own currency, separate from the euro, so the vote will be about whether the country continues to pay into the EU budget and adhere to the eurozone’s regulations.  Norway is also living outside the EU, yet it contributes to the budget, adheres to the regulations and seems to get most of the benefits of membership—and thereby offers a way for Britain to exit and still maintain all the trappings of membership.  The uncertainty over the seven years that would be required to transition out of membership would be over how, exactly, a new relationship would be structured.

The eurozone is suffering from high unemployment, low economic growth and a disparity between the richer (UK, Germany, Scandinavia) and poorer (Greece, Spain) nations.  All European Union members are governed by policies created by the European Commission and the European parliament, and subject to the dispute resolution powers of the European Court of Justice.  British voters might decide they don’t like the shared sovereignty and ties to the economic problems.

Naturally, there is a lot of lobbying on both sides in the run−up to the vote.  Economists seem to be uniformly against a Brexit, pointing out the obvious: that it would be hard for London to continue its role as the financial capitol of Europe if its nation is not actually a part of the European Union.  They point out that, unlike Greece, Britain already controls its own currency, and it is not a part of the passport−free zone, which is shorthand for having control over its own policies in regard to the Middle Eastern refugee crisis.

Those in favor of Brexit say that Britain would be freer to enter into trade deals with other countries (think: China) than it is today, and of course there is a lot of nationalist sentiment about reducing foreign influence over British affairs.

Who will win?  The most recent polls show 46% of British voters will cast a ballot to leave the EU, vs. 44% who will vote to remain, and 10% who say they don’t know how they’ll vote.  A little more than a month from the actual Brexit election, there appears to be plenty of time for either side to continue pressing their case.